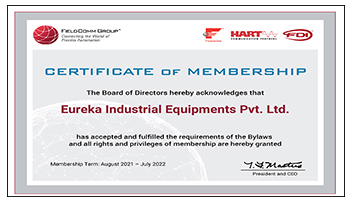 We have got HART ability.We are a member of HART Foundation and offer HART Protocol with our Metal Tube Variable Area Flowmeter Transmitter and Electromagnetic Flowmeter.

The HART Communications Protocol (Highway Addressable Remote Transducer Protocol) is an early implementation of Fieldbus, a digital industrial automation protocol. Its claim to fame is that it can communicate over legacy 4-20mA analog instrumentation wiring, sharing the pair of wires used by the older system. According to some, due to the huge installed base of 4-20 mA systems throughout the world, the HART Protocol is one of the most popular industrial protocols today.

The protocol was developed by Rosemount Inc., built off the Bell 202 early communications standard,in the mid-1980s as proprietary digital communication protocol for their smart field instruments. Soon it evolved into HART. In 1986, it was made an open protocol. Since then, the capabilities of the protocol have been enhanced by successive revisions to the specification.
There are two main operational modes of HART instruments: analog/digital mode, and multidrop mode.